Summary: The Crystal Lassies exhibit was built in the amusements section of the New York World's Fair in 1939. Described as a "polyscopic paradise for peeping Toms" by the New York Post (Michel Mok, "Norman Bel Geddes Gets Very Boyish Idea Seeing Dream Reflected in Mirrors," May 31, 1939), for Crystal Lassies Bel Geddes used mirrors to amplify and multiply the peep show experience. He claimed to have gotten the idea after seeing a beautiful woman reflected in the mirrored walls of the Barberry Room (one of his own designs). Both "Bel Geddes' Sexorama" and "The Teaz-orama" were suggested as names for the show to connect it with Geddes's highly successful Futurama exhibit, also at the World Fair.

The building housing "Crystal Lasses" was built around a central room in the shape of a giant octagon measuring 32 feet from plane to plane on each of its 26 sides. The entire interior was mirrored; including the stage and a few other parts, there were a total of 32 surfaces. In total approximately 100 pieces of glass were used, mostly 1/4 inch glass with a mirrored back. Around the circumference of the room ran three 4 ft wide strips of 1/2 inch thick one-way or "speakeasy" glass at 8 foot high intervals. This "speakeasy glass" was mirrored inside the octagon but clear on the gallery side, allowing spectators to look through into the mirrored room without being seen themselves, and unable to see other spectators. Maximum capacity was around 600 people, and each show ran approximately 12 minutes.

Although only one dancer at a time occupied the octagon, each was reflected from every angle as she danced, creating a sense of watching an entire highly synchronized troupe of dancers. At the end of their dance the lights would dim and they would change places through a trapdoor to the blue-lit dressing room below the stage. The subject of the dancers's attire was one of controversy; the costumes were originally designed to be topless, but Geddes was forced to add brassieres after complaints from the organizers of the Fair. Later, claiming that the brassieres were "vulgar," Geddes ordered that the dancers become topless again.

Crystal Lassies was baptized by a cocktail party held by Geddes on Friday, May 26th, 1939. Initially a 27 week run was planned, with an estimated cost of $190,538, gross of $426,240, and a profit of $235,702. However, "the glass deteriorated rapidly under the heat of the lamps and within a month began to show signs of wear. In another month we had to close down the enterprise. It had earned over $100,000 up to that point and had it run for two summers at the Fair would have been an outstanding success" (Norman Bel Geddes, letter to Bernard Sol, May 20, 1946, Norman Bel Geddes Papers, Harry Ransom Center). Geddes officially closed the enterprise with a cocktail party held on Wednesday, May 22, 1940 for the 15 men who had financed Crystal Lassies. 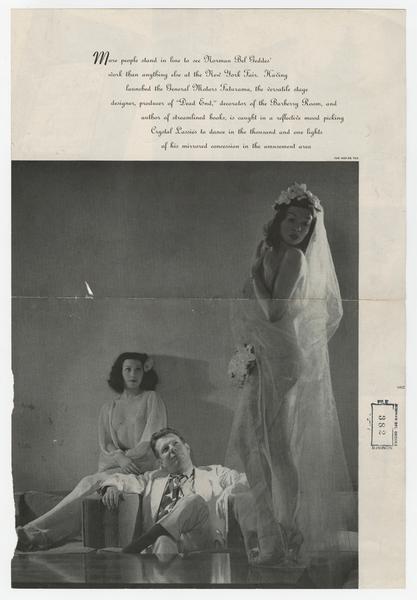