Summary: Bel Geddes was invited to come up with a comprehensive plan for redeveloping Toledo, Ohio. The core problems to be solved in the “Toledo Tomorrow” project included transportation and traffic flow, and Geddes reiterated many of the concepts developed for Shell Oil and Futurama.

He designed and built a diorama of Toledo, Ohio as it could look in 50 years if careful urban planning were instigated immediately. The city’s Paul Block Newspapers financed the $150,000 model, which, at 60-feet long, was set up in the city’s zoological park for voters to consider the issue. The redevelopment plan advocated the removal of all railroads from the downtown area and broke up the gridiron street pattern. Parks were proposed for the river banks, a now common urban revitalization strategy, and residential areas were organized into self-contained units. As with Futurama, the “Toledo Tomorrow” display was set up so that viewers had an aerial perspective of the model city from a theoretical height of 6,000 feet. In this instance, however, they walked rather than rode around an imagined Toledo.

While it is now difficult to know what direct impact the model had on Toledo’s post-war development, a May 24, 1946 article in Tide magazine credited the project with sparking a “reborn civic attitude,” resulting in “a rash of planning projects” totaling $225,500,000 and funded jointly by private industry and a new municipal payroll tax. 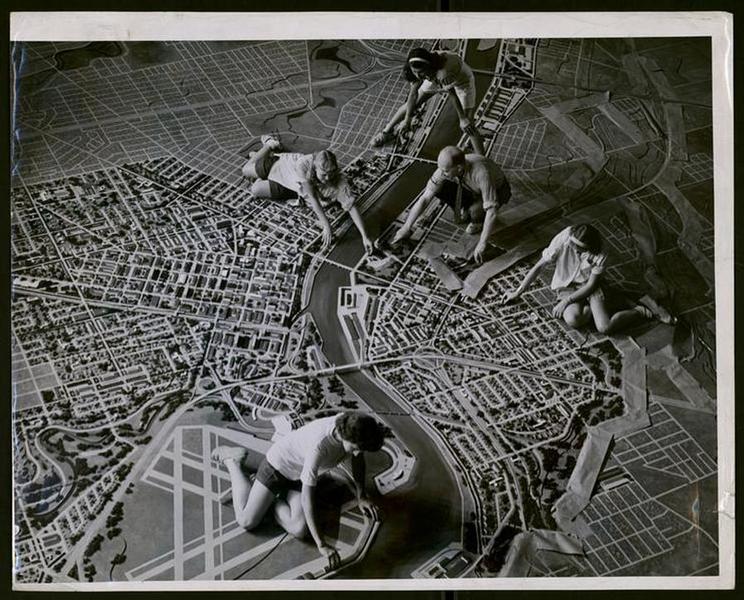