Summary: The success of The Miracle attracted the attention of Hollywood film producer Jesse Lasky and led to commissions for production design work for directors Cecil B. DeMille (Feet of Clay, 1924) and D. W. Griffith (Sorrows of Satan, 1925).

In Sorrows of Satan, Bel Geddes depicted a climactic battle between good and evil with high-contrast lighting—Satan rendered in dark shadows—and a swirling mass of angels and demons traversing a grand stairway. As the New York World reported, he achieved the effect of “a foggy, dim heaven ... a place of lights and hazy shadows” by spraying gallons of Nujol on the set with massive atomizers. Although he saved the studio $25,000 on the cost of the grand stairway by “building the steps out of flat and then tipping the camera to get his effect” he was reported to have erased the savings the next day on another set and was eventually released from the project.

Nujol was a brand of mineral oil also marketed at the time as a laxative.

The motion picture was adapted from Marie Corelli's book by Forrest Halsey, and from John Russell's treatment. It was produced by the Famous Players-Lasky Corporation. The cast included Adolphe Menjou, Ricardo Cortez, and Lya De Putti. 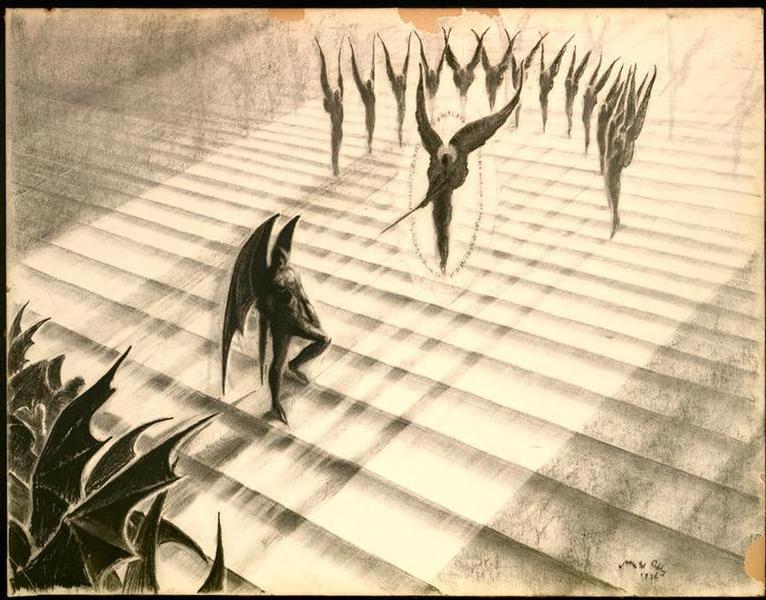