Bookshop owners and publishers’ salesmen are the two types of booksellers to be found on the door. In the early 1920s, the Village, as well as other neighborhoods in the city, were filled with small bookstores, stalls, and magazine stands. Many were ephemeral like Frank Shay’s, lasting only a few months or a few years, and others moved from one neighborhood to another as rents and demographics changed. One little-bookshop trend of the moment seems to reveal itself among the smaller bookshops: owners giving their shops their own full names. At the same time as Frank Shay’s Bookshop was in business, “Hector MacQuarrie’s Book Shop” and “Dorothy Grant’s Bookshop” were founded.

[p style="margin-left: 20px;">People who run speciality booshops tell you a number of interesting things. The owner of a little bookshop, for one thing, usually wants his shop to stay a small bookshop. He wins his customers’ confidence; they put themselves into his hands, and are grateful to him. He does not have to crawl; he is the master of his profession; those who enter ‘can be nasty somewhere else.’ There is very little risk in a specialty bookshop, it seems, of losing money; absolutely free credit usually is given; and everybody pays up. The little bookshops co-operate with one another: getting books from each other; sending customers to each other. And finally, there seems to be something like a conspiracy among them against, as one of them put it, best sellers in a bad sense.’ ‘But, I asked, ‘if someone wanted a copy of a sensational best seller wouldn’t you get it for him?’ ‘Well.’ the young woman replied, ‘we might get it for him, but we’d inquire into his motives.’”

Frank Shay, notably, did not appear to stigmatize bestsellers in his little shop. He carried them and even allowed their authors to sign his door. 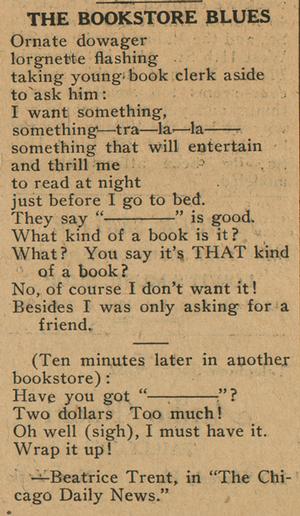 
Title: "The Bookstore Blues" in The Greenwich Villager

"The Bookstore Blues" in The Greenwich Villager, 1921